History of the Cochin Chicken Breed

Cochin Chickens arrived in England from China in the 19th century and have been a sensation ever since. Their soft, fluffy feathers, covering them down to the feet and beyond, are irresistible.

Cochin chickens are one of only three chicken breeds in the American Poultry Association’s Asiatic class. Reliable Poultry Journal, a publication that flourished through the 1920s, describes them in the publication The Asiatics: Brahmas, Cochins and Langshans. “Their origin is veiled in mystery, but from data gathered by numerous early fanciers, the period of their first appearance is fixed.”

Associate editor A.F. Hunter recorded the Cochin breed history, which was then within living recall. The birds were imported from Cochin China in 1843. In the 19th century, that wasn’t Mainland China, but a French colony in what we now know as the south of Vietnam. Those birds were presented to Queen Victoria. Lewis Wright, in his Illustrated Book of Poultry (1890), noted how different those birds were from the round, chubby Cochin Chickens of 50 years later. The Victoria Cochins are tall and rangy, like Malays. The drawing, by Samuel Read, is posted on my blog. 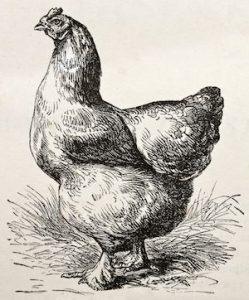 In 1847, four years after Queen Victoria received those original ‘Cochins,’ Shanghai birds were imported to England.  Wright pointed to them as the true ancestors of modern Cochins. The ‘Shanghai’ name didn’t stay with the fluffy new imports, though. Poultry writers called them Shanghai, but “The public had got to know the new, big fowls as Cochins, and would use no other word, and so the name stuck, in the teeth of the facts, and holds the field to this day,” he wrote.

Cochins, at 11 lbs. for roosters and 8 ½ lbs. for hens, are a dual purpose breed with good egg production. The American Poultry Association recognizes Buff, Partridge, White, Black, Silver laced, Golden laced, Blue, Brown and Barred varieties of the Cochin. Many unrecognized colors are also raised, including Red, Silver Laced, Mottled and Splash. Seventeen color varieties of bantam Cochins are recognized by the American Bantam Association, including Black Tailed Red, Birchen, Golden Laced, Columbian and Lemon Blue. Their popularity is second only to the English Game bantam.

Franklane Sewell, noted poultry expert and artist, wrote in 1912 that although style had influenced development of birds with very short legs, the ideal is “one that will preserve all the vitality of the ancient Asiatic and prove, as they have with some fanciers who study their proper management, to be productive and pro­fitable as well as exceed­ingly showy.”

That description continues to suit Cochins well in the 21st century. Their soft feathers beg to be touched. Combined with their calm and friendly disposition, they make an excellent backyard chicken. The hens are often good broody hens and mothers.