We at Purely Poultry are excited to announce that we will be doing a series of featured and guest blog posts about our customers! We want to get to know you all, and the best way to do it is by having you email us your story. 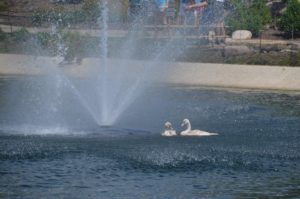 , we received a call from Kelly, with the Nicholas Conservatory and Rockford Park District. From there we learned about the city of Rockford’s Swans. There was Pride, who died at age 17 in December 2015, and Joy, who passed away in 2011 age at 15. The city raised enough money to replace the swans, and they needed our help! Purely Poultry to the RESCUE!  We always have many breeds of swans for sale! We were able to help Kelly out, and get her 2 Female White Mute Swans.

The Nicholas Conservatory and The Rockford Park District decided to hold a fundraiser they named a “Swanathon” to raise money for 2 new swans.  They even budgeted to have fresh bedding for the swans in the winter months!

The girls arrived safe and sound, just in time for the Release Party! On May 28th, 2016, the Nicholas Conservatory held their Swan Release Party, and released the swans onto the water at their new home.  To help name the new swans, a Facebook contest was put into place!  The winner could receive a one year individual Nicholas Conservatory membership.  The new swans were named Millie, and Rosie. The Rockford Park District made this into a HUGE event, and everyone was invited to come down and celebrate the new swans. There were swan cookies, swan stories, and many more swan related arts, crafts, and games. We at Purely Poultry also sent them some awesome prizes to give away as well!

Millie and Rosie now enjoy their days swimming in the Eclipse Lagoon, and being pampered by their caretakers and all of the visitors to the Nicholas Conservatory. What an amazing life! 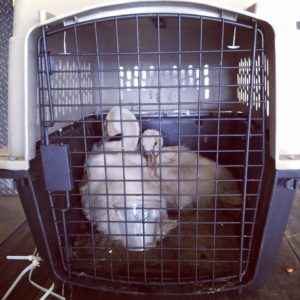 Stories like these make everyone here at Purely Poultry, so happy to continue to give everyone our utmost attention, and care while helping you decide what birds are best for your home, or park in this case.

Thank you to The Nicholas Conservatory and Rockford Park District, for letting us be a part of your amazing story!