Is Your Bird a Boy or a Girl?

Once chickens are full grown, it becomes clear which are the roosters (males) and which are the hens (females). Roosters are larger and taller in stature than hens. Roosters also crow or Cock-a-doodle-do! They act differently than hens – 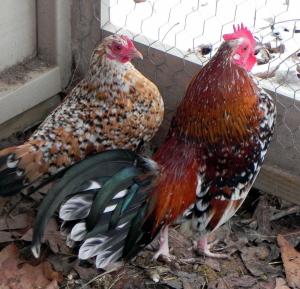 being more watchful, stomping about acting like they are in charge. If there is a threat, the hens in your flock will run to the edges of the yard or into the safety of the coop, and the roosters will usually stay out in the open to address the threat.

Some hens and roosters of the same breed will look very different and have very different colorations like Golden Penciled Hamburgs, Salmon Faverolles, Welsummers, and Silver Phoenixes. Most breeds though have roosters that follow the same coloration patterns as the hen, but are just grander and more dramatic, like Speckled Sussex, Brahmas, Dominiques, or Orpingtons. Some breeds have a rooster that looks slightly different, like Cuckoo Marans, where the roosters are lighter than the hens. Then there are the sex-linked crosses, where the males and females are completely different colors.

The biggest trick is to try to determine if chicks are males or females. There are professional chick sexing experts who work for hatcheries and thus allow people to order chicks as all females or males. This is an art and a skill not many people possess!

But there are  ways to tell… In the case of the sex-linked crosses, such as the black sex linked, golden sex linked, and red sex linked chickens, the chicks of males and females are colored completely different. Thus, there is no question who are the boys vs. the girls right out of the shell. Certain breeds also have chicks that exhibit different colors at hatching, which is called autosexing. The very popular Cream Legbar is one such breed. Other breeds may exhibit differences within a couple weeks of hatching as the chick start to feather out. Examples would be young Salmon Favorelle cockerels, which will start to get black wing feathers at about 2-3 weeks of age. Also, young Cuckoo Marans cockerels will get lighter gray feathers than the pullets which will have more of a charcoal look about them.

mmature ducks are almost impossible to sex, but mature duck breeds often have very different looking males and females. Some breeds are always very obvious like mallards, but in other breeds like Pekings, males and females can look very similar. Sometimes you can distinguish males from females from the size; with Pekings, the males tend to be larger than the females. In other breeds and species of duck, the females are larger than the males. Also note, that when it is not breeding season, male ducks can “go into eclipse” which means that they won’t have the flashy bright colored plumage that usually sets them apart. Some can look exactly like the females when they are in eclipse, and some just look dull, like my Black Cayuga Drakes look now in the early fall.

There are also some other interesting ways to tell if your duck is male or female. Drakes often have larger heads than females, and drakes also can have a curl to their tail feathers that females don’t get. The curl does disappear at certain times of the year though! Also, only females ducks actually quack. Males make a raspy soft noise, but don’t make the loud and demonstrative quack that females make. Someone once told me that one of my ducks had laryngitis and pointed at Teddy, my big Peking Drake, who was talking away in his raspy gravelly voice!

Many species of birds exhibit what is referred to a dimorphism, where males and females are visually very different. For the most part, males are flamboyant and colored for attracting mates. Females tend to have more earthy, camouflaging colors, so she can be as hidden as possible as she sits on eggs. Peafowl are perfect examples of this rule, but there are multiple exceptions, where the females are just as flashy as the males, such as with Bahama Pintail Ducks or Guinea Fowl.

Sometimes it is all about closely looking at facial skin such as wattles and combs on chickens or the horns on guinea fowl. Many times it takes experience in the breed or species. Many pigeon owners say that they can accurately determine whether pigeons, which look almost exactly alike, are boys or girls by recognizing feminine or masculine looking features to the facial structure. Often you can determine sex by the call the bird makes and it often comes down to observing behavior, watching for breeding displays and behaviors.