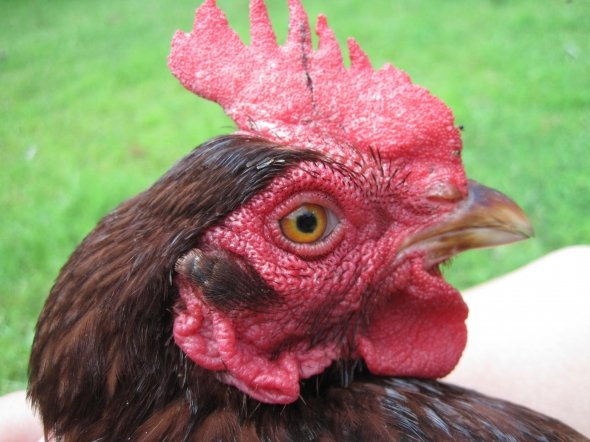 Icons of the Farm: Rhode Island Red and White Chickens

Judge Card also offers his drawings of RIRs and compares their body type to another big red bird, the Buckeye. The RIRs have a horizontal oblong body and calm disposition, while the Buckeye carries the body at a 45-degree angle and is more alert and active. He attributes the differences to the Asiatic heritage of the RIR and the game blood in the Buckeye.  The entire article, including his drawings, is posted on Google Books, pages 583-587.

A breed that excited so much interest inspired the creation of a white variety. J. Alonzo Jocey of Peacedale, Rhode Island set out to create them in 1888 by crossing his rose-combed White Leghorn rooster with hens that were three quarters Buff Cochin and one quarter White Wyandotte. According to David Scrivener, some breeders sold their poor quality White Wyandottes and White Leghorns as RI Whites. The resulting confusion nudged the APA to postpone recognition of the breed until 1922, at which time only the rose comb variety was accepted. The difference in comb separated the birds Jocey and other RI Whites fanciers bred from those who would undermine it with birds of lesser quality.

Rhode Island Red Bantams are one of the ten most popular breeds in the ABA.

A century later, the Old Type Rhode Island Red is included in Slow Food’s Ark of Taste  for both its eggs and its meat. The Ark of Taste describes it as “incredibly rich flavor that is most appropriate for (and best released in) stews.”

Cooking heritage birds requires some thoughtful techniques. The meat is different from that of six-week-old industrial Cornish Rocks. Frank Reese of Good Shepherd Poultry Ranch in Kansas has been recognized as an American Treasure: Made in America Award for his heritage poultry. He will bring his Barred Rocks and White Jersey Giants to Washington DC to be cooked for the American Treasures Culinary Experience on the Fourth of July Take Price in America Celebration at the Capitol.

“If you grow them to look like the Standard, in weight and body shape, you will have a marketable bird,” he said. “The old guys who wrote the standards didn’t write them to win shows. They wrote them so the birds would be productive.”