Why you shouldn’t hybridize your Pheasants…

I have a pair of Lady Amherst as well as a pair of Red Golden Pheasants, and the other day I was talking with Tyler 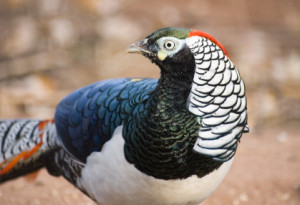 about pheasants, and he mentioned that I should never cross breed the two types of pheasants. Well, I was a bit surprised. The two pheasants are two different species. I didn’t even consider that they would cross breed. I do keep both pairs in the same aviary though, as many types of pheasants like to live in mixed aviaries with different types of pheasants and birds. This group of four do very nicely together, and I’ve been debating adding some other species as well along with some native Chinese forest plants… but now I was wondering if keeping these species together is the right thing to do.

My pheasants are only turning three years old this year, so I hadn’t been considering breeding yet. They have started laying eggs, but neither of the females seems interested in sitting on them, and I haven’t incubated them. But if I had hatched the eggs, the chicks would be a mixed hybrid of two species. At first I thought, how cool! What would they look like? And then I thought, oh no, that is really messing up the genetics of these two species. But then I also had to go online, do some research, and take a peek at some of these hybridized pheasants. And some of the results are beautiful, unusual, and exotic looking. Since then I’ve been debating and philosophizing about the ethics with hybrid pheasants.

First I thought about my chickens. My flock is all heritage breeds. I have a couple pure-breed roosters that I separate and breed to pure-breed hens of their same breed. But sometimes I breed my Cuckoo Marans rooster to a group of Ameraucana hens to get offspring that will produce olive colored eggs for the purpose of adding interest to my egg cartons. And sometimes one of my hens gets broody and hatches out a bunch of chicks of completely mixed parentage. These mixed breed chicks are officially considered ‘mutts.’ They really aren’t hybrids.

Many types of chickens are called ‘hybrids.’ Officially the word hybrid refers to the offspring of two different species, like a horse-donkey or wolf-dog mix. But it seems the word hybrid is getting a bit convoluted and now ‘designer’ dog mixes like labradoodles are called ‘hybrids’ instead of ‘mutts.’ With chickens, the word hybrid is usually referring to a more planned and selective breeding between two specific lines of two or more breeds, or even with mutations of those breeds, to create individual offspring that are all very similar.

So the debate can start there – the heritage pure-breed chickens are wonderful and important to preserve. That’s what the purpose of organizations like the Livestock Conservancy is – to preserve the genetics of the heritage breeds of domestic livestock including chickens. But hybrids and mutts have a place too, for things like high productivity and olive colored eggs in my cartons! 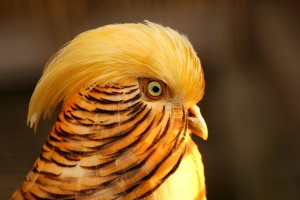 Pheasants are a large family of birds with many genera and many, many individual species. Although they have been being breed in captivity for hundreds of years, and the genetics of the captive bred birds are probably quite different from the genetics of the population of wild birds, pheasants are still a group of wild species. It is actually incorrect to say a ‘breed of pheasant.” So when you crossbreed two different species of pheasant, you are creating official hybrids, and you are really mixing things up genetically as well as producing offspring with all sorts of variations. This is not the same as breeding two breeds of chickens.

Most species cannot crossbreed with other species, but some pheasant species crossbreed very easily and can result in fully fertile offspring. This is especially true of pheasants of the same general type or from the same genus like the Lady Amherst and Red Goldens which are both Ruffed Pheasant (genus Chrysolophus). And the hybridized offspring come in an astonishing array of colors and patterns making breeding hybrid pheasants quite alluring and even addictive.

Although there are many people who find the different color variations exciting and feel that it is not unethical to play with the genetics of hybridizing captive populations of pheasants, it is considered to be a bad or unethical practice by many breeders and collectors who appreciate and prioritize species’ purity.

So if you are considering purchasing or collecting or breeding pheasants, be aware that there are many breeders selling cross-bred hybrid pheasants. Some of these breeders may simply be naive and not realize that their pheasants are crossbreeding, or maybe they have not been diligent about segregating their species. And remember that the females look very similar between many pheasant species. (My Lady Amherst female has a slightly crooked toe; otherwise it would be hard to tell who was who.)

Then there are also breeders who are actively and clearly selling hybrid pheasants, marketing them as different colored varieties, maybe even charging more for these exotic new color combinations. You have to decide how ethical or acceptable you feel this practice is.

But there is yet another aspect to pheasant breeding. Pheasants can produce mutations. Although the word mutant or mutation has developed a negative connotation in mainstream society, when applied to bird breeding, it is a usually a serendipitous good thing. Occasionally two parents of the same purebred species will produce offspring with special genes that present in new and exciting color variations. These newly colored offspring will then, if they are a true mutation, ‘breed true’ which means that all their offspring will look the same as one another, as well as their parents. Many breeders are selling mutations of certain species of pheasants, calling them new color mutations. If you are driven to add some truly exotic and rare colored versions of pheasants to your aviary, then it is these mutations that you should be seeking out rather than hybrids.

However, there are breeders out there selling pheasants, calling them new mutations, but they are really just hybrids. 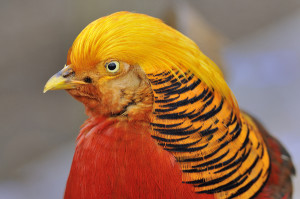 It is very difficult to determine if birds are hybrids or mutations without an extensive breeding program. In general, the offspring of hybrids usually don’t breed true, and mutations do breed true. But sometimes hybrids look like they are breeding true for several generations, and the breeder may truly believe that they have created a mutation.

With all this cross breeding, there is concern that the captive pheasant populations have been genetically compromised. The genetic purity of the pheasant species currently in captivity is only as pure as the integrity of the breeders behind those birds. The world pheasant species are gorgeous as they have naturally evolved, and the genetic purity of that truly needs to be preserved. As a collector and breeder of pheasants, you want to be demonstrating solid birds that look correct and that have pure and correct genetic material behind them.

Although I find it intriguing and fun to look at the assortment of unusual feather patterning and colors of hybrid pheasants, I don’t want a bunch of mixed up pheasants in my aviary (after all, I am wildly searching for true native Chinese Mukdenia to add as a ground cover in there!). So, I am happy that I made my aviary out of an old dog kennel that has a divider I can insert to separate the two pairs should I decide to breed them next year and get true Lady Amherst and Red Golden Pheasant offspring.

← Step-by-Step Guide to Getting Ready for Chickens
The Biggest Lessons We Learned from 2014, and How We’re Going to Crush 2015 →