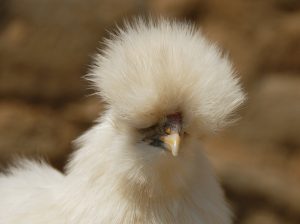 Silkies are one of the most popular breeds of chicken out there. We sell thousands of them each year, mostly for pets or for the backyard flock because they are such spectacular mothers and will happily hatch most any type of egg and brood the young. But the Silkie has a much darker purpose, and I mean this quite literally. Beneath all the soft, fluffy exterior, you may be surprised to find black skin, very dark flesh, and ebony-colored bones. The Silkie is also referred to as the “Black-Skinned chicken, or wu gu ji, in Mandarin.

Silkie chickens are a small, bantam-sized bird and do not typically develop much body fat. As we know, small and boney meat birds lack demand at the market so are generally farm raised instead of commercially grown. This farm raising and slower growing causes a little stronger flavor. These three traits combined: the size, stronger taste, and leaner, less-fleshy bird make the Silkie perfect for soup. The meat of a silkie will fall apart and form threads which, according to Mama Tong at MamaTongSoup.com, has 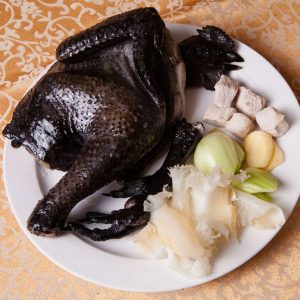 been described as “bamboo-thread chicken” (juk si gai, in Cantonese).” She goes on to say that “Threads and silk have similar meaning, which may be why these chickens are called Silkie chickens.”

Believed to have originated in China, the Silkie chicken is thought to be a medicinal, or curative, food that is said to warm the soul and boost the immune system. In an article published by Modern Farmer, “Those who follow the dictates of Chinese medicine believe that a silkie soup, augmented with ginger, goji berries, and red dates will increase female fertility, nourish a developing human fetus and restore the vitality of a woman who has recently given birth.”

Whatever your reason for owning Silkie chickens, we think these fuzzy little egg-laying creatures should be called ” the healing chickens.” If they don’t soothe you emotionally by being the loving and gentle lap chickens that they are, they will, instead, soothe you physically with their therapeutic qualities. You can purchase your Silkie “Healing Chickens” by visiting our product page on Silkie Bantams. Whichever you choose, you should definitely get your own today because if nothing else, these colorful, soft, and fluffy little birds have clearly proven that sometimes, dark sides are not evil. In case you wondered, Purely Poultry has Silkie Chickens for sale! 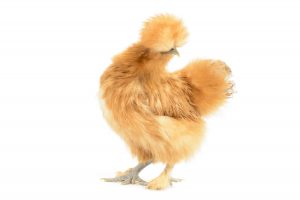 Want to learn more about taking care of your silkies.

Check out our Care Guide.