The Dubbing Debate: Should You Dub Game Birds for Exhibition?

People are usually ready to share their opinions, whether asked or not. Well, when the topic is the dubbing of game birds for exhibition, people have strong opinions! 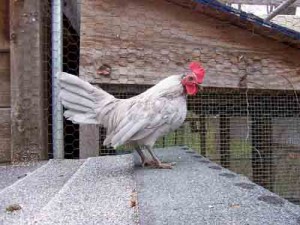 Dubbing is the practice of cutting off the comb, wattle, and earlobes of chickens.

Currently, game roosters entered into exhibitions must be dubbed in order to compete, according to American Poultry Association standards. Those breeds include:

When a roster is dubbed, the wattle, the earlobes, and the comb are removed using sharp scissors. It is best if two people handle the task. The bird is wrapped in a towel or other cloth so that only it’s head is visible. Then one person holds it while the other cuts. The scissors are sterilized with alcohol and some kind of blood stop should be on hand – just in case.

First, the wattle is cut from front to back, then the earlobes, and finally the comb from back to front. It is important to remember that, once the skin is cut away, it cannot be put back. Most experts recommend cutting less instead of more. 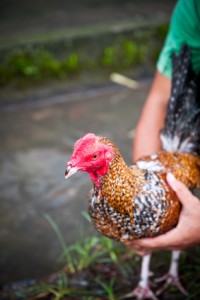 Dubbing of game birds has a long history and there are a couple of reasons it is done today. One of those reasons is simply tradition. As the name “game” implies, these are chicken breeds that were traditionally bred for fighting purposes. During a fight, the wattles, combs, and earlobes were almost like handles for the opposing rooster to grab hold of, and terrible wounds could result if they were torn off. As chicken fighting is now illegal in 48 states, no one needs to worry about that anymore.

However, the look of a dubbed roster is still appealing to many. While the birds are not actually fighting, lots of people like them to look like they could win in a fight. It makes sense that if, all of your life, you’ve seen game birds dubbed you would think that’s the way they should look. This is the reason I believe the APA Standard of Perfection calls for dubbing.

The second reason people maintain that dubbing is good for game birds is more reasonable. If a bird lives in a cold climate and is not dubbed, frostbite can cause serious problems. However, there is fault in the logic of dubbing only game birds in cold climates because other birds with similar wattles, combs and earlobes can suffer frostbite as well. No one suggests that other breeds should be dubbed.

Reading through forum threads, chatting with poultry fanciers, or reading blogs reveals that people are divided over the question of dubbing. Some people believe that it is a sign of good animal husbandry and that a flock will be healthier for it. Others think it is unnecessary at best and, at worst, cruel. Regardless, of the plethora of opinion, the fact remains that the APA and ABA require dubbing of game breeds for competition.

There is a simple way to solve the whole debate: don’t make dubbing a requirement, but also don’t penalize birds that have been dubbed. Dubbing just should not be a factor in the judgment of game birds. My guess is that, eventually, dubbing would fade away and eventually disappear.