Why Are My Birds Losing Feathers?

There are four common reasons why your chickens may be losing or missing feathers. 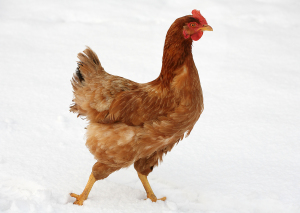 Some chickens molt more gracefully than others – I hardly notice some of my hens are molting while others look terrible! If your chickens are molting the feather loss will seem haphazard, and you’ll also see new pin feathers coming in. One thing to note – the act of growing feathers takes a lot of nutrients and so you will see a marked decrease in eggs being laid while your hens are molting.

If the feathers are only missing over the lower back then, the reason is probably due to ‘treading’ by a rooster. When a rooster mounts a hen for breeding, it is called treading as he tends to step on the hen with his feet. Some roosters are very graceful about the process and never break a feather on the hens, but others are clumsy and aggressive and break off the feathers on the back side of the hens. You may also find some broken wing feathers and feathers missing behind the heads and back of necks of the hens. You can try clipping the rooster’s claws and spurs, but I find that it really doesn’t help much. I tend to select now for graceful roosters to keep this problem in check. This also can happen if you have too many roosters for your size flock of hens.

Feathers usually grow back very fast if they are molted out as the whole feather comes out clean. But when feathers are broken, as in the case of the treading, there is a stump left behind in the skin. The feathers won’t grow back until the stump comes out with the next molt. So don’t be alarmed if it seems that the feathers are taking forever to grow back. Be sure that hens with bald backs have access to shade as they can get sunburned.

Feather picking or pecking is the third reason you might see feather loss on your chickens. It is natural tendency with birds to preen and poke at their feathers and the feathers of their flock mates. Chickens are also attracted to redness. If one member of the flock breaks a large feather and the tip bleeds a bit, the other chickens in the flock may start picking at it. Also, if there is an injury, the other chickens may start picking at it. Products like Blu-Kote are useful as they not only disinfect but also are designed to camouflage the injury, so the other chickens leave it alone.

If one of your chickens seems to be getting pecked at, the best way to resolve it is to separate the pecked bird. Then wait until it is completely healed, with feathers back in place, before returning it to the flock. Sometimes addressing feather picking is simply a matter of breaking the habit with birds.

Pecking issues often can occur with young pullets and cockerels around the base of their tails. The big tail feathers are large and shiny as they grow in and can irritate the skin around them. This coloring is terribly attractive to other young birds who can’t resist picking, and so you may find broken tail feathers or missing tail feathers on your young birds. I usually don’t worry too much about this, as they will eventually grow in fine, but if there is actual bleeding, applying some Blu-Kote or a similar camouflaging product would be called for.

If you see a lot of aggressive feather picking and pecking, your birds may be overcrowded.

Very rarely, chickens will pick their own and other birds’ feathers or lose feathers due to nutritional deficiencies. If you are feeding a commercial diet, this will not happen. I only know of one instance where a hen started losing feathers and had brittle and ragged looking feathers due to lack of proper nutrients. A friend of mine has a small flock and feeds a lot of table scraps. Although there was commercial feed always available to her hens, one of her Orpingtons preferred the table scraps and didn’t bother eating the layer pellets. She looked terrible, but once she was cut off from the table scraps and started eating the layer pellets, she returned to normal with the next molt.

The fourth main reason for feather loss would be problems or issues. Stress, caused by something like being chased by a dog, could instigate feather loss. Also, parasites like mites can cause feather loss. Check the area around the vent, under the wings, and around the face for mite or lice infestations. Then treat both the birds and the coop. To prevent lice and mite infestations, be sure that your chickens have access to dry dust or dirt to use for dust bathing.

If you have addressed the main cause and want to support the growing back of feathers, be sure that your birds have well-balanced nutrition and a stress-free environment. Adding extra protein as well as a mineral supplement like Vi-Tal would be effective as well.

← Who are we selling to? Who’s using and visiting our site? Developing the ideal customer avatar of Purely Poultry
Six Tips for Taking Excellent Photos of Birds →