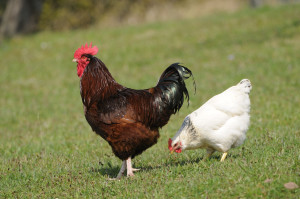 A lot of new chicken owners worry about their chickens getting worms. In this case, we don’t mean earthworms, which your chickens will love eating. We mean intestinal worms, endoparasites, like roundworms. Worms can be very serious, not allowing your birds to thrive, decreasing in egg laying or gaining weight, and even causing death.

However most backyard chicken owners will never have to worry about worms. If your chickens have plenty of space they probably won’t even get worms, and if they do, it will be a passing thing, and you probably won’t even notice. If your chickens do contract a tough enough case of worms that they can’t naturally shake on their own, the worm infection is easy to eradicate.

The first thing is prevention. It is always easier to prevent than to cure. Prevention is primarily related to good husbandry. Healthy active chickens usually can eliminate worms from their systems on their own. You want to avoid exposing your chickens to crowded conditions where the worm load becomes huge.

Also, note that worm eggs need wet, warm places to thrive. So be sure to keep the litter in your coop dry and clean. Worms egg also are damaged or destroyed by sunlight. Encourage your chickens to spend time on short grassy areas in the sunlight. Keeping your chickens out of damp, shady, muddy areas is a good idea. Worm eggs cannot develop in cool temperatures. Most worms are inactive in temperatures under 50 degrees F.

You can also add natural supplements to your chickens daily routine as a way to help prevent worms. A dash of Apple Cider Vinegar (about 1 tbsp per gallon) or a couple fresh crushed garlic cloves can be added to their water. Adding powdered cayenne pepper to their feeders, about 1 cup per 25 pounds, can also help keep worms from taking hold in the digestive tracts of your chickens. It also makes your chicken feed less tasty to rodents. Your chickens though will enjoy the spiciness.

So you’ve been responsibly working to prevent worms, but you suspect that your chickens may have gotten them anyway. How do you diagnose a worm infection? The most telling factor is weight loss despite the fact that your bird or birds are eating a lot. Make a practice of taking a good look at your chickens. Lift one or two up each time you visit the coop and take note of how heavy they are. (Sometimes it is hard to see if your birds are too skinny because the feathers can hide it.) You may also notice that your birds have pale wattles and combs, a sign of iron deficiency which is typically caused by worm infections. You can also get an official worm count test done by a veterinarian. Just make sure you use a vet who knows how to look for worms in chickens. It is a different process than with carnivores like dogs and cats.

If you recognize these common worm symptoms in any of your birds, you should consider using a commercial dewormer. And even if it seems only one bird is affected, you should deworm the entire flock to avoid re-infection.

Some people use a commercial dewormer as a preventative. This is probably not necessary in most backyard situations. But if you have had multiple cases of worm infections, or you cannot avoid damp shady ground, deworming as a preventative has merit. Because worms usually start up in Spring as temperatures warm up and the ground is damp from winter thawing, springtime would be optimal to do so.

There are lots of commercial dewormers available. At Purely Poultry, we offer some of our favorites that we feel are effective and safe. Always use commercial dewormers according to the label instructions. Pay attention to withdrawal periods. You often have to wait a certain amount of time after using these dewormers before eating the eggs or meat of chickens..

We also offer the traditional Wazine Dewormer. Wazine is added to the drinking water. It can effectively control a variety of worms and can be used with various bird species as well.

It is a good practice to alternate dewormers as parasites have been known to build up resistance to them. If you are dealing with a lot of regular worm pressure on your property, plan to alternate the type of commercial dewormer you use each year.

If you are raising your chickens organically, you cannot use commercial dewormers. But you have plenty of options for a healthy, worm-free flock. Read about Organic Deworming Methods here.

← Can people catch Avian Influenza from their poultry?
Organic Chicken De-Worming and Prevention →